How To Get Involved With Saving The Bees 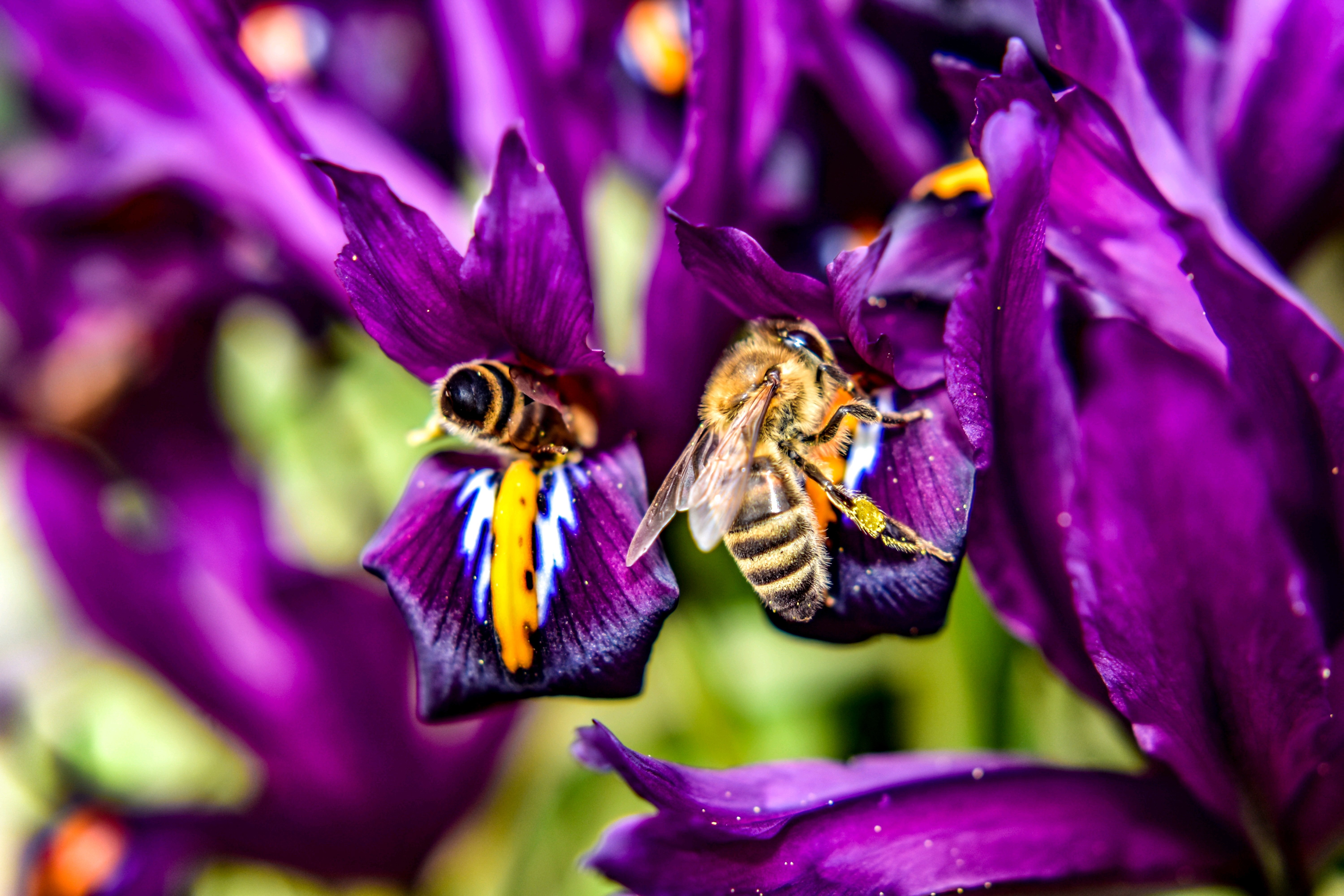 National Honey Bee Day started with a simple concept: bring together beekeepers, bee associations, as well as other interested groups to connect with communities and promote beekeeping and the importance of bees to our own existence. It is a day to honor the insect responsible for more than a third of the food we eat, with beekeepers and honey bee enthusiasts from across the country. It is also a time to celebrate honey bees and recognize their contribution to our everyday lives, as well as raise awareness to help protect bee populations for future generations.

How To Get Involved With Saving The Bees

Fusion’s own, Joel Cook has family ties to the bees. In fact, his dad is a local beekeeper in Nebraska, so he has some firsthand knowledge in the bee department, and why it’s so important to support the bee ecosystem (aka: the “bee-cosystem”).

Let’s pay homage to beekeepers, whose labors of love ensure we have bees to pollinate our crops.

Tell us all about the bees?

Joel: There are about 25,000 different bee species around the world. Only four of these species are honeybees, one of which is the western honeybee here in the U.S. Honeybees, as their name suggests, make honey. It’s their winter food for feeding the tens of thousands in the hive when it’s too cold to fly.

What’s the difference between honey bees and bumble bees?

Joel: Bumble bees don’t make honey we can harvest, but they are important pollinators, too. Around 250 species of bees are different types of bumblebees. Their hairy coats can attract more pollen. The excess hair also allows them to fly at colder temperatures than honeybees. Some species have tongues and are better at pollinating plants with long, tubular flowers. Plus, they are capable of a unique (and very cool) form of pollination called “buzz pollination” – by shaking the pollen from flower to flower – which is how some crops are pollinated. While most bumblebees are wild, some species are increasingly used commercially to buzz pollinate. In fact, bumblebees can actually pollinate more flowers per bee than honeybees, though a honeybee colony (50,000 bees in the summer) is much larger than a colony of bumblebees (only 250).

But why is pollination so important to us as humans?

Joel: You’ve heard the expression “as busy as a bee”, right? Well, that expression should not be taken lightly. Bees pollinate over one-third of everything we eat and play a vital role in sustaining the planet’s ecosystems. Some 84% of the crops grown for human consumption (roughly 400 different types of plants!) need bees and other insects to pollinate them to increase their yields and quality. These include most fruits and vegetables, many nuts, as well as cocoa beans, coffee and tea. Crops grown for food for dairy cows and other livestock are also pollinated by bees. And it’s not only food crops that rely on bee pollination: cotton does as well. As a result, annual global crop pollination by bees is estimated to be worth $170 billion!

So, the bees are moneymakers! Cha-ching, buzz buzz!

Joel: Yes, but beyond their financial value for maintaining our fragile food supply, bees also make an invaluable contribution to ecosystems around the world. They play a vital role in providing food for other species besides humans. Seeds, fruits and berries eaten by birds and small mammals are all from plants that are pollinated by bees. So, bees are truly the guardians of not only our food chain, but the biodiversity of our species as well.

Bees are industrious pollinators because they have co-evolved with flowering plants over millions of years. Bees and flowers have a symbiotic relationship; the bees need the flowers for food, while the flower needs the bee to reproduce. Unlike other insects, nectar and pollen from flowering plants are bees only food source; the sweet nectar drink gives adult bees energy, and pollen is protein-rich baby food for growing more strong, healthy bees.

In the process of foraging for food, bees are designed to pollinate. If you watch a female honeybee or bumblebee on a flower, you will see she has little “baskets” of pollen on her back legs. She takes them back to the nest to feed the young after fertilizing the flowers.

How the heck do bees help pollinate plants though?

Joel: Quite simply, the bee gets covered in pollen, from the male part of the flower (called the stamen) and deposits the grains on the female part (the stigma) of the next flower that they visit. Once the pollen is on the stigma it moves down into the ovary where it fertilizes and forms a seed. A few months later the seed grows into a fruit, vegetable or other type of plant. Think of an apple tree; it blossoms, is visited by bees and produces apples later in the summer containing the seeds. Which, if planted, could slowly grow into a new apple tree.

What are some of the threats for bees?

Joel: When inclement weather confines bees to the hive during the spring and summer, they become vulnerable and easy prey for the parasitic varroa mite to spread viruses that kill off its host. Most people have heard about colony collapse disorder which wiped out a third of all honeybee colonies in the U.S. when it first struck back in 2007. The disorder is still not fully understood, but a combination of parasites, viruses, poor nutrition and pesticides are thought to be behind the widespread death of honeybees, where 40% of colonies are dying each year. One of the bees’ major allies in combating these adversaries is the beekeeper.

What are the responsibilities of a beekeeper?

Joel: A beekeeper is, in essence, a manager of bees. They maintain and monitors the hives. Once the honey is ready to be harvested, the beekeeper will remove and process it for human consumption. A beekeeper needs to maintain healthy bees, prepare colonies for production, inspect colonies for any sign of disease and replace the queen bee when necessary. Beekeepers also need to follow food safety guidelines when harvesting and processing the honey.

Springtime is when the beekeeper must get the bees ready for the coming honey-producing months, whether it's working with existing colonies, or with new bees that will be going into empty hives. It is during this period that the beekeeper will closely examine his or her bees in order to ensure that they are free of parasites and that the queen is healthy and capable of producing eggs.

It is the beekeeper's responsibility to remove the honey as it becomes ready during the summer months, and to add additional boxes that contain combs if the bees need more space to produce. It's important for honey production that the bees have enough space within their hives, in order for them to function at an optimal level. Therefore, as the honey production accelerates, the beekeeper must be aware of when to provide them with more space.

When harvesting honey, a beekeeper needs to wear a protective suit, gloves and veil, to prevent from getting stung. A smoker (a device that releases light puffs of smoke) is sometimes used to calm bees that are agitated. After the combs have been removed from the hive, the wax coverings on the combs are removed and the honey is extracted. The beekeeper can do this by hand or with the help of a mechanical extractor. The honey is then purified by straining it and skimming any impurities away. The honey is then ready to be jarred and sold.

That sounds like a lot of responsibility! What can we do to help beekeepers and the bees?

Joel: Well, I’m glad you asked! There are many ways that we can all help them out.

Bees forage from a myriad of flowering plants for pollen and nectar sources, which they then bring back to their hive to eat, feed their young, and turn into honey! One of the contributing factors for Colony Collapse Disorder (CCD) is a loss of foraging habitat for bees. You can help combat this by planting a garden full of diverse plants that bloom at different points throughout the season like dandelions (let them grow!), lavender, herbs, squash, and clover. And don’t reserve your green-thumb for the springtime alone. Late-season planting for pollinators is a great way to help bee colonies survive the winter. Even if you are moving around from place to place, that doesn’t mean you can’t contribute or plant things! Container gardening is a simple and helpful way to give the bees a boost.

Put out a water source for bees

Like all living things, bees need water to survive. You can help bees stay hydrated by creating a simple “bee bath” in your yard or any outdoor space to add to a wild bee habitat. Use a shallow container with gently sloping sides. Be sure to include some stones or marbles in the water source, too, so the bees have somewhere to land while they are collecting water.

Don’t use pesticides or herbicides

Minimally filtered, organic honey has a better chance of less chemical residues, harmful antibiotics, pesticides or herbicides. Did you know that honey from box stores and grocery stores goes through an ultra-filtration process? This sounds like a good thing, but actually it means that water is added to your honey and filtered under high pressure, then the water is removed. An independent test conducted by Food Safety News found that 76-77% of the tested honey that was bought at grocery stores and big box stores like Wall-Mart and Target had zero pollen and 100 % of the tested honey purchased at drug stores like Walgreens, Rite-Aid and CVS had no pollen. …Wait! Side-question. Why do we need pollen in our honey?

Joel: In addition to health benefits of pollen, it also makes our honey traceable. Without pollen, there is no way to trace where your honey comes from, which means it could be from an infected bee population or watered-down honey supply. China’s infected bee population was treated with antibiotics after a viral infection that killed off millions of colonies. This antibiotic is actually dangerous for humans and has been since introduced to the U.S. honey supply imported from China.

Thanks Joel! Even if you can’t step into a bee suit and head out to a hive, there are still so many simple things you can do to help our struggling pollinator populations. By taking these small steps, you’re not only supporting the bees, but helping to nourish, diversify and strengthen local ecosystems.

Let’s all do our part to save the bees!

We're giving away 20 bottles of honey to 20 lucky travelers!

Email marketing@fusionmedstaff.com with the subject line: #SAVETHEBEES and tell us where you get your honey when you're on a travel assignment. You could win a bottle of delicious honey from Joel's family bee farm, Cook Bee Yards!