Women In The Healthcare Industry 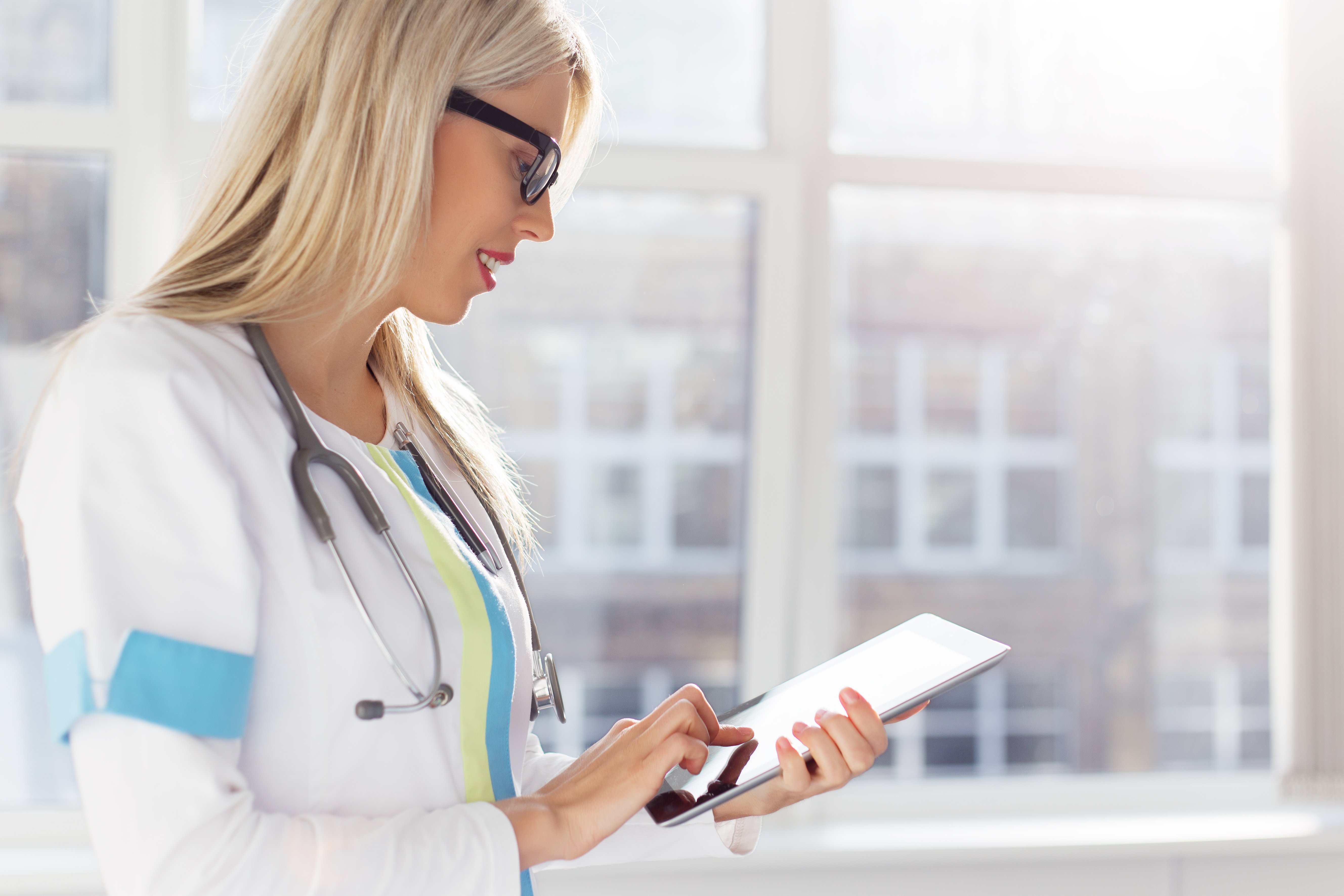 Throughout history, it has taken a lot of hard work to empower women in business, specifically in the medical field. Women haven’t always been presented with the same opportunities or a platform to stand, but there is no doubt they have always been adamant about soliciting change.

Women In The Healthcare Industry

Did you know only women make up only 30 percent of healthcare executives? The barriers to women’s advancement in healthcare leadership are often not obvious to most and are mainly unconscious biases and assumptions. According to the same research from consulting firm Oliver Wyman, men are not intentionally standing in the way of women who are seeking to reach the top. In fact, 70 percent of executives are pro-equality in the workplace.

So what's the deal and how do we help more women advance their healthcare careers?

First and foremost, healthcare organizations need to set benchmarks and hold everybody to a standard. Empowering more women to seek out opportunities in their field is the responsibility of the organization's leadership and executives and should be modeled as such. Secondly, women in healthcare need to be ambitious and proactively set goals for themselves, then go for it, without fear of failure. Replacing the technique of “peer review” with “peer learning” helps medical staffing be more accepting of the trials and tribulations and learning from failure, rather than being punished for it.

When women are given the opportunity to grow in their strengths, they thrive in their roles and seek new challenges to overcome.

Historically speaking, women have been making a difference in healthcare since the beginning of medicine. Here are 16 influential women who have paved the way and empowered other women in the medical industry over the past two centuries:

Women Trailblazers of the 1800s

Ann Preston was the first woman to be the Dean of a medical school—Woman’s Medical College of Pennsylvania (WMCP), the first medical school in the world that accepted women exclusively. She worked passionately to educate women about their own bodies, first as a student at WMCP, and later as the Dean. An advocate for her students, she withstood demonstrations against female medical students, and believed that the same level of medical education should be available to women. In her later years, she supported her students by giving her assets to the WMCP to fund scholarships.

Florence Nightingale is known for her nursing work in the Crimean War, where she organized crews of nurses helping wounded soldiers and improving sanitation conditions. Later in 1860, she established a nursing school at St. Thomas’ Hospital in London and helped lay a foundation of professional nursing. She is most notably recognized as the founder of modern nursing and has nursing achievements named in her honor, such as the Florence Nightingale Medal and the Nightingale Pledge.

Clara Barton is best known for founding the American Red Cross. Additionally, she served as a self-taught nurse in the American Civil War, providing supplies and care to wounded men. She ran the Office of Missing Soldiers, working to provide information and closure to families with missing or fallen soldiers. Later in her life, she worked to formalize nursing education, gave lectures, and participated in the women’s suffrage movement.

Elizabeth Blackwell was the first woman to earn an actual medical degree in the United States. She pioneered medical education for women, co-founding the New York Infirmary for Women and Children. She wrote several books including the well-known Medicine as a Profession for Women. Her medical interests were spurred by a dying friend who told her she could have been spared her worst suffering if her physician had just been a woman.

Rebecca Lee Crumpler was the first African-American woman to earn a medical degree in the United States. After graduating from the New England Female Medical School (now known as Boston University School of Medicine), she moved to Richmond, Virginia to help freed slaves who did not have access to medical care at the time. Her book, Book of Medical Discourses, was published in 1883 and was one of the first medical publications authored by an African-American person.

Mary Edwards Walker is the first and only woman recipient of the Medal of Honor. After receiving her medical degree from from Syracuse Medical College in New York she started a medical practice, but unfortunately, due to the lack of trust in female doctors at the time, her practice failed to flourish. She then volunteered with the Union Army, where she was captured by the Confederacy for several months and accused of being a spy. After the war, she campaigned for women's rights and ran for political office before women even had the right to vote.

Mary Putnam Jacobi was an avid writer, medical researcher, and leader in the women’s movement. She debunked theories involving the mental capabilities of women during menstruation, such as the idea that menstruation made women unsuited to education. Who knew that women were capable of getting an education while experiencing their cycle?! Needless to say, she was influential in the fight for women's educational opportunities. This was in opposition to Edward Clarke’s book, Sex in Education: Or, A Fair Chance for Girls. Rather than presenting her opinion, she provided extensive research and findings that disproved Clarke. In 1876, she received Harvard University’s Boylston Prize for her essay, The Question of Rest for Women during Menstruation. Jacobi wrote more than 100 medical papers. In 1894, she wrote Common Sense Applied to Women's Suffrage, which was later used to support the women’s suffrage movement. Jacobi’s work won awards and helped to break down barriers in women’s education and medical findings. She was also one of six prominent suffragists who founded the League for Political Education.

Marie Curie is one of the most well-known, famous scientists of the 20th century. She experienced many tragedies in her life, including being raised in Poland (at the time, Russian-occupied) and later her husband died after being struck by a horse-drawn carriage. She started her journey as a chemist by taking on her husband’s role at the Sorbonne after his death, making her the first female professor. She also pioneered research on radioactivity, discovering radium and polonium, and developed mobile radiography units, providing x-ray services to field hospitals in World War I. Curie was also presented with two Nobel Prizes.

Margaret Sanger coined the term “birth control” and opened the first birth control clinic in the United States. She was an educator of contraceptives and established organizations to help legalize and bring effective, safe birth control methods to women all over the country. In 1914, she wrote The Woman Rebel, a newsletter that promoted contraception, and Family Limitation, which challenged anti-birth control laws. Her clinic was eventually searched and closed, deemed illegal under Comstock Law. Later, she founded the American Birth Control League, which became Planned Parenthood Federation of America. In 1929, she created the National Committee on Federal Legislation for Birth Control, which helped further her efforts to legalize safe contraception methods for women.

Powerful Pioneers of the 1900s

Barbara McClintock discovered genetic transposition (how genes change places within the chromosome) and through maize cytogenetics. She earned a Nobel Prize for her findings, making her the first woman in the United States to win an unshared prize. Her work with genetics helped discover gene suppression, physical trait patterns, and genetic recombination. She is known as one of the most brilliant medical scientists of her time.

Virginia Apgar is known for designing and developing the Apgar Score, the first standardized method to assess the health of newborns by checking the baby's appearance, pulse, grimace response (reflexes), activity and respiration. She was a leader in both anesthesiology and teratology and contributed obstetrical findings to neonatal medicine. While she was a pioneer in several medical science departments and was often the first or only woman to serve (or win) an accolade, she avoided the organized women’s movement, saying that “women are liberated from the time they leave the womb.”

One of Gertrude Belle Elion’s most well-known contributions to medicine was her development of 6-mercaptopurine (Purinethol), the first major drug used to fight leukemia. Her other developments include Azathioprine (Imuran), Allopurinol (Zyloprim), Pyrimethamine (Daraprim), Trimethoprim, Acyclovir (Zovirax), and Nelarabine. Her findings are used to help treat leukemia, malaria, organ transplant rejections, and the HSV virus. Even after her retirement, Elion continued to work in the lab and oversaw the development of azidothymidine (AZT), which was the first drug treatment for AIDS.

Rosalyn Yalow was a medical physicist who created and developed radioimmunoassay (RIA), a technique used to measure the concentration of antigens in the body. This technique made it possible to scan blood donations for infectious diseases, like HIV/AIDS or hepatitis. She was a co-winner of the 1977 Nobel Prize in Physiology or Medicine. If you’ve ever had a blood transfusion, Yalow is who you should be thanking.

Ruth Westheimer, better known as Dr. Ruth, became famous as a sex therapist and media personality. She has revolutionized open discussion about sexuality, sex education, and contraception with her candid, humorous demeanor through shows like Sexually Speaking, The Dr. Ruth Show, What’s Up Dr. Ruth?, and You’re on the Air with Dr. Ruth. She has written more than 40 books, helping to pioneer frank and open dialogue about sexuality. In 2002, she received the Leo Baeck Medal for her humanitarian work promoting tolerance and social justice.

Patricia Goldman-Rakic is known as one of the most distinguished neuroscientists of her time. She was the first scientist to chart the frontal lobe of the brain, and her research has contributed to ground-breaking research and findings for diseases like Alzheimer’s and Parkinson’s. She also studied memory cells in the prefrontal cortex, which led to the discovery that dopamine loss in the prefrontal lobe causes memory loss. Her findings helped change the path of neuropsychiatry by creating new ways to treat and understand mental illnesses, memory and behavior associated with diseases like schizophrenia, Alzheimer’s, and Parkinson’s disease.

Wafaa El-Sadr is known for her efforts in helping research and develop programs relating to HIV/AIDS and infectious diseases. She has led studies through private foundations and New York State and New York City Departments of Health, as well as the National Institutes of Health, U.S. Agency for International Development, U.S. Centers for Disease Control and Prevention, and Health Resources and Services Administration. Recently, her focus is on highlighting the impact of HIV and has established the Domestic Prevention Working Group.

Thank you to all these women and to several more who are unnamed that have paved the way for women in healthcare and research. By empowering more women to make a difference in the medical field, we’re encouraging them to seek executive positions at the helm of healthcare, putting women on a well-earned and well-deserved map to quality patient care.